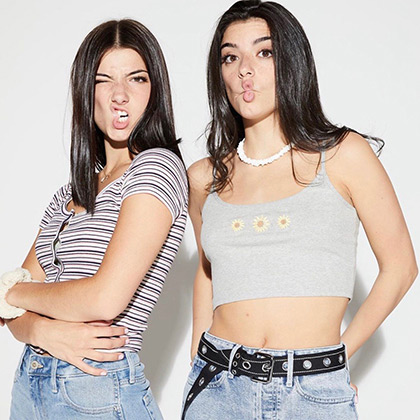 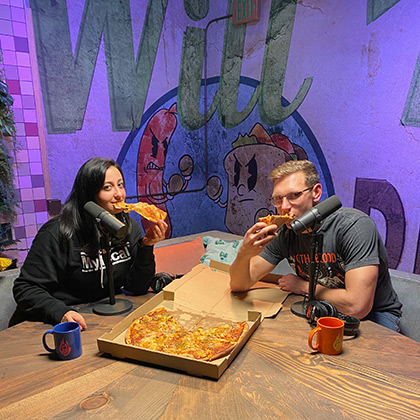 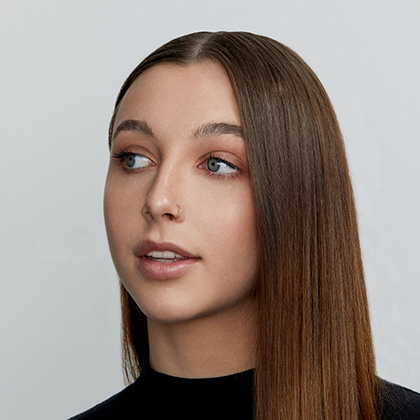 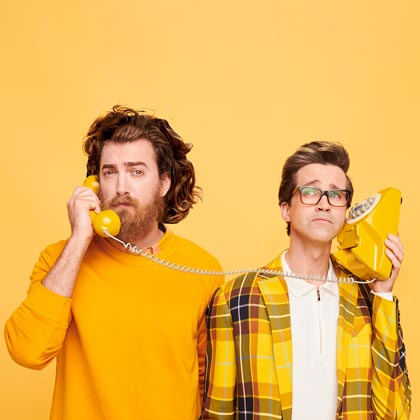 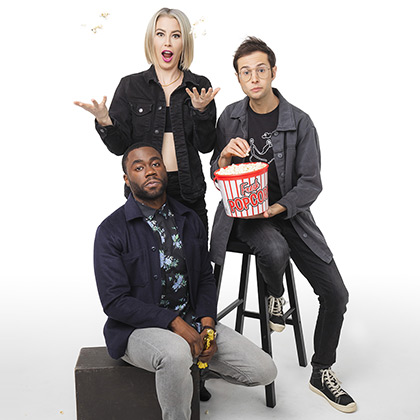 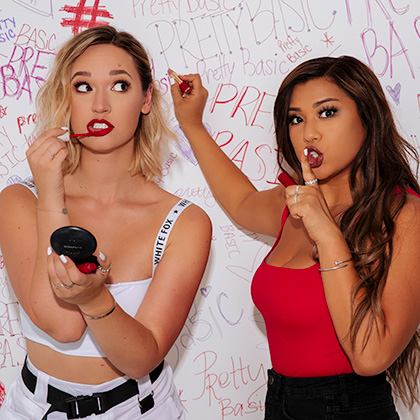 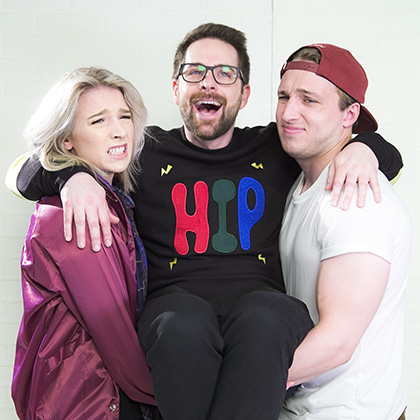 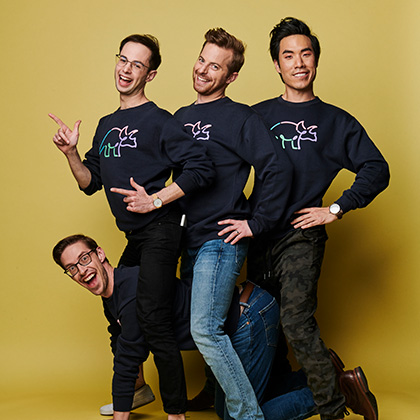 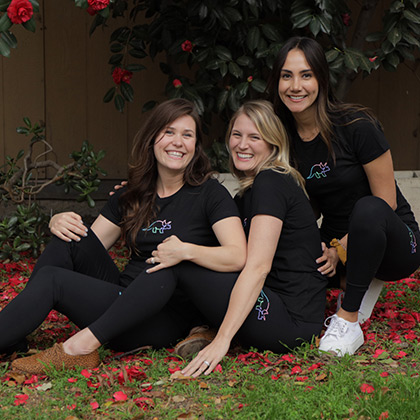 Charli and Dixie D'Amelio are leading Gen-Z content creators who quickly evolved into worldwide social media phenomenons with a combined social following of over 170 million followers. 16-year-old Charli and 18-year-old Dixie first rose to fame with their viral videos on TikTok and have since become the most watched faces of their generation. Charli is an extensively trained competitive dancer which makes her one of the most captivating creators to watch, while Dixie is a singer and content creator who enjoys more of the fun, comedic side of content.

Josh Scherer is the Senior Culinary Producer for Mythical Entertainment. He is the author of The Culinary Bro-Down Cookbook, and thinks the Crunchwrap Supreme is the most important culinary innovation of the century. He is the conditional world record holder for most baby food eaten in one minute, and has a spork tattoo.

Nicole Hendizadeh is a culinary producer and all around nice girl at Mythical Entertainment. From food stylist, to kids cooking instructor, Nicole has worked almost every odd food job there is. She loves tacos containing any part of the cow, and a strong Negroni. 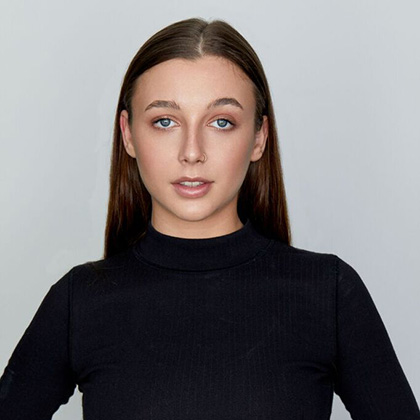 Emma Chamberlain is a 19-year-old Youtuber whose self-titled YouTube channel has accumulated more than 9 million subscribers. She is known for her raw and shameless personality, she isn't afraid of speaking her mind! Although YouTube is her main focus, she is also present on all social media platforms and is now branching out to podcasting.

Rhett & Link met in 1984 on the first day of first grade at elementary school in Buies Creek, North Carolina. Their teacher Ms. Locklear held them both in from recess for writing profanity on their desks ("hell" and "dam," if you're wondering). She sentenced them to coloring pictures of mythical beasts, and they've been best friends ever since.

After graduating NC State with engineering degrees and entering the exciting field of supply-chain logistics, Rhett & Link began posting original sketches, songs, and viral local commercials that earned them stardom in the early days of YouTube.

Twenty years hence, Rhett & Link are married family men (5 kids between them), hosts of the most-watched daily show on the Internet and a wildly popular podcast, stars of in the scripted comedy series Buddy System, NYTimes #1 best-selling authors, globally touring musicians, and owner-operators of a 50-person entertainment company based in LA: Mythical Entertainment.

Rhett & Link's YouTube channels have a combined subscriber base of over 21 million people with over 5 billion total views. They have been featured on The Tonight Show with Jimmy Fallon, Good Morning America, LIVE with Kelly and Ryan, and Conan and have been heralded as top comedic talent by Variety, Forbes, Mashable, NPR, USA Today, and AdWeek, among other media outlets. Rhett & Link have also received various awards honoring their content over the years, including Webby, Streamy, and Shorty Awards.

Zach Kornfeld is comedian, producer, and director best known as one of The Try Guys and co-host of The Trypod. He's a #1 New York Times Best Selling author, award winning podcast host, and runs a production company in Los Angeles.

Kelsey Darragh is a comedian, writer, filmmaker, and host of the podcast, Confidently Insecure. She can be seen on E!'s Dating: No Filter and recently released her first book, Don't F**king Panic.

Garrick Bernard is a stand-up comedian and professional screenwriter, best known for his work on Solar Opposites and Star Trek: Lower Decks. He was recently cast in the pilot for Freeform's Single Drunk Female.

Marc D'Amelio has been a successful business professional and entrepreneur for over 20 years, working with many of the best apparel, footwear and accessory brands in the world. He serves as CEO of the D'Amelio family and has amassed a considerable following across social media. This year, the family will appear in their own docu-series on Hulu which will follow the lives and businesses of the D'Amelios. Marc and his wife, Heidi, will star on the series and serve as executive producers.

Heidi D'Amelio may be best known as mom to Charli and Dixie, two of the most popular names in social media today, but there is a lot more to juggling being a wife and mom than meets the eye. On top of being a full-time mom and overseeing her family's demanding schedules, Heidi continues to pursue her passions which include health and wellness, fitness and philanthropy. She's devoted to ensuring the internet is a safe place not only for her daughters but for other teens as well. 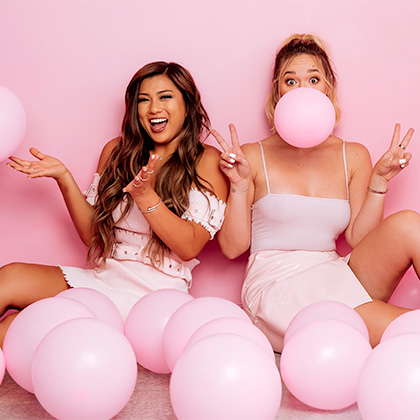 Best friends and co-hosts of the chart topping podcast, Pretty Basic, Alisha Marie and Remi Cruz, are two of today's top digital content creators and have a combined social following of over 28 million followers across their channels. Each week, the duo opens up to their listeners about what's happening in their life, with topics stretching from mental health, to body image and positivity, to dating in 2019, listeners get a candid look into their busy lives.

Ian Hecox is an American YouTuber and co-founder of Smosh, the largest comedy brand on the internet, which is comprised of the YouTube channels Smosh, Smosh Pit and Smosh Games. Started in 2005, Smosh is still one of the most subscribed YouTube channels, with over 35 million subscribers and 8 billion views. Ian lives in Los Angeles, California. 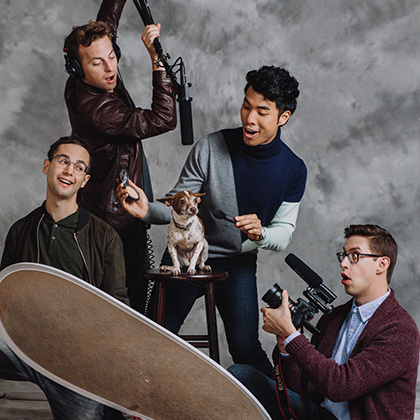 The TryPod is an award-winning comedy documentary series that has garnered over 2 billion views with its witty take on daily life and social issues. On camera, The Try Guys are a comedy quartet known for their wild willingness to try anything and everything, from labor pain simulators to Alaskan dog sledding. Behind the camera, they're the founders of the independent production company 2nd Try, as well as seasoned, data-driven video producers who have cracked the science of making uplifting viral entertainment for the digital landscape.

you can sit with us

Becky Habersberger is a sustainable beauty guru and a hilarious cat lady. She is the Try Wives resident pop culture historian, flawless MUA, and always has the hottest tea about the trashiest television.

Ariel Fulmer is mother to all, with a circular saw in one hand, and a chardonnay in the other. She is an interior designer with a competitive spirit that will defeat you in any board game you bring to the table.

Maggie Bustamante is a registered nurse, health and wellness advocate, and proud Peruvian. When she's not saving lives, she's either on the hunt for delicious food, enjoying live music, or doing typical dog mom things.